Or as I like to call it, “Sleeping in the Car”. Unless I am driving, I pretty much sleep my way through travel – ferries, planes, sleeper trains. It’s a gift that makes backpacking a lot easier. Though on this particular road trip, it was essential. Driving 700km from Jogja, Java to Ubud, Bali in four days, to climb three volcanoes, with most days beginning before sunrise.

The exploration began in Jogjakarta (Special region of Yogyakarta) in Central Java. Jogja is a much smaller and cleaner city than the over crowded Jakarta. The main attraction here, for me, is the ancient and incredible Borobodur, a Buddhist temple which dates back to the 8th century. The temple is an intricate, mandala shaped maze, believed to have been used as a walking meditation for Buddhists. There are impressive uniform bell shaped structures as well as hundreds of amazing Buddha sculptures within the monument, many beheaded by vandals over the centuries. 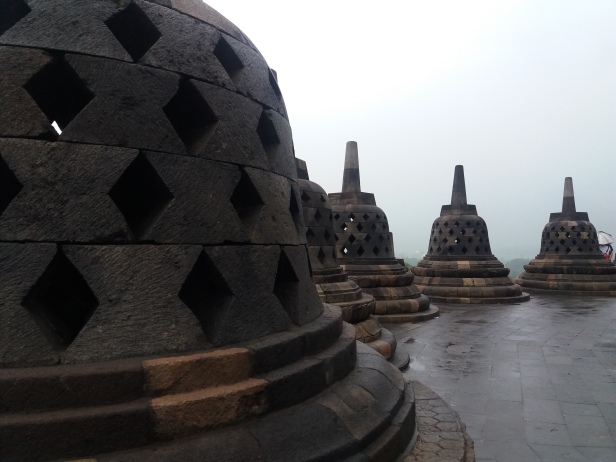 There is an opportunity to visit the temple at sunrise but I opted for the afternoon to beat the crowds. Unfortunately it was a wet and miserable day at Borobodur and there were still crowds, huddling into the entrances, a rainbow of umbrellas in the way. The Indonesians are a very friendly and welcoming nation, so a lot of my time was taken up with being asked to pose in photos with school tour groups. I still managed to do plenty of exploring, get some decent photos and tag along to some tour groups to learn about the history of the temple.

The tour company I chose was Volcano Discovery. I decided to go on a  4D/3N private tour. The comfort of an air con jeep and a tailored tour at my own leisure and pace was worth the price tag. I amn’t really cut out for hiking…

Day one, we drove from Jogja to Mount Lawu to climb to the waterfall. This was a rewarding and simple enough walk, both up and downhill. The steep paths wind through vegetable patches and rice terraces, the 3000 metre height gives stunning panoramic views of the lush, green countryside. The farmers working together, the innovative ditches, the vast array of crops, all show how Indonesia’s framework is quite socialist and how the islanders manage to be self sufficient and incredibly adept at managing the terrain and the weather.

I bumped into a bunch of lively school girls who were very taken with the novelty of this white girl in their rural village. They walked home alonside me, full of questions to put me through my paces, giggling and showing off the English they’d been taught. Another example of the charming hospitality of Indonesia.

Sudden torrential showers of warm, tropical rain (which drenched me through both my poncho and mack) made the 10km walk quite challenging. There’s no rain like Indonesian rain. As we approached the waterfall, the steps in the forest had converted to a river from the rain pouring down. Despite my squelchy new runners,  it was a thoroughly enjoyable, splendidly scenic hike. 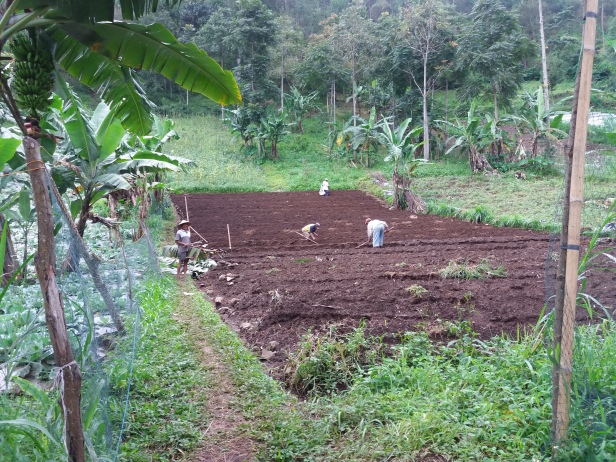 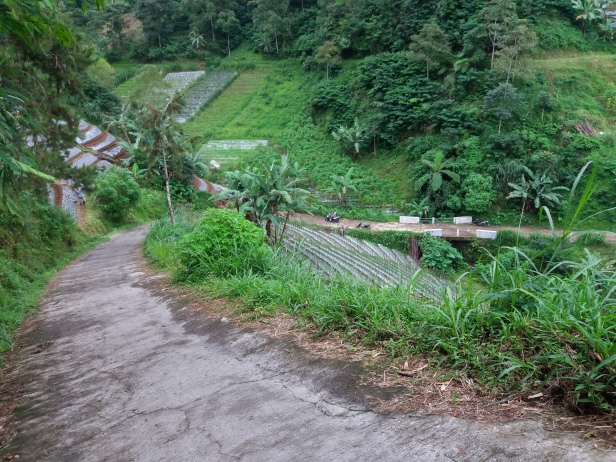 Day two was a very early start, as we had to drive east about 6 hours to Mount Bromo, an active volcano within the Bromo – Tengu – Semeru National Park. Bromo is in a spectacular setting; three volcanoes within a caldera. This cauldron-like crater is unworldy, almost lunar in its barren appearance, covered in layers of volcanic dust. On a bleak, drizzling and chilly day, this is an almost depressing wasteland.

The following morning is a 4am start to catch the sunrise from the observation point. This involves walking with only your torch for light, alongside countless other tourists on a rocky and muddy uphill path. It is disorienting as you accidentally bump into small horses that you actively try to avoid for fear of being back kicked in the head. There are so many horses and their loud owners walking and whispering alongside you, trying to psyche you out in the hopes that you’ll cave and accept a ride to the top of observation point. Quite a daunting experience, and I fell right down on my face.

However, once at the viewpoint, the light starts to creep in and the sky turns from a dark navy to an icy blue, the volcanoes start to take form and you forget about all that. The sunrise streaks the sky with orange hued rays, the birds begin to chirp. Slowly you see the extent of the landscape, now basking in golden light. Thick cloud pools softly nestle in the caldera and it is magnificent. A world away from the desolation of yesterday. 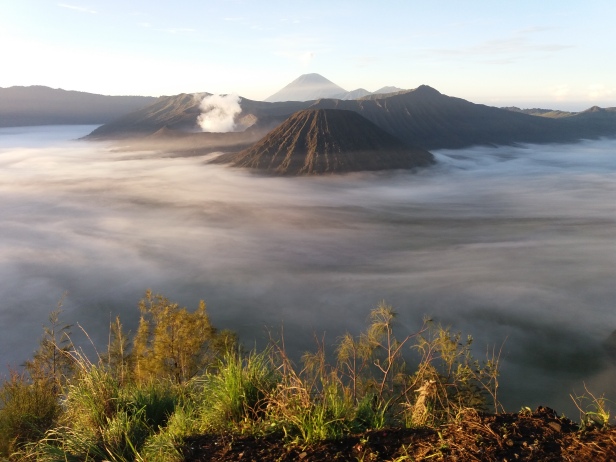 It’s a 200 km drive from Mt. Bromo to the Ijen volcano complex, on the far east of Java. Another early start, up at 1am to chase the blue flame of the Ijen mines. A 3km steep upwards hike up to the rim of the crater. Slow and steady wins this race, but we are on a countdown to beat the sunrise.

If Bromo was Luna on Earth (or Hell as some might argue), then apocolyptic Ijen is home to some other malevolent entity. We walk down the ankle breaking terrain, into the area that contains the lake I’m told is inside this crater. As we do, we see small, lithe, topless men heaving baskets of solid sulphur up the same rocky path. Incredible. These exploited miners are paid roughly 5c a kilo, so many have given up this back breaking labour and now charge tourists to guide them into the crater and down to the mine.

As we precariously scramble and stumble to the bottom, I am forced to put on my gas mask, as the sulphuric fumes become less novel and more tear inducing. There is nothing to see but suffocating smoke billowing into the dark sky, hiding the moon. Now it is darkness and dots of flashlights and phones. It seems the trip into hell was for nothing. The fifty or sixty tourists wait patiently, some clambering around the edge of the crater. Their patience is handsomely rewarded. Through some kind of burning off process of the sulphur, transforming from gas into solid, the miners manage to produce a truly unique crackling light through the acrid smoke. This occurs only at night, hence the insanely early wake up call. An ethereal spectre of a blue/purple light begins to smoulder in two or three places in front of our eyes, in the form of a blazing flame. It is shocking and unforgettable, and seems like an achievement to have climbed up and into the belly of the beast to witness it. 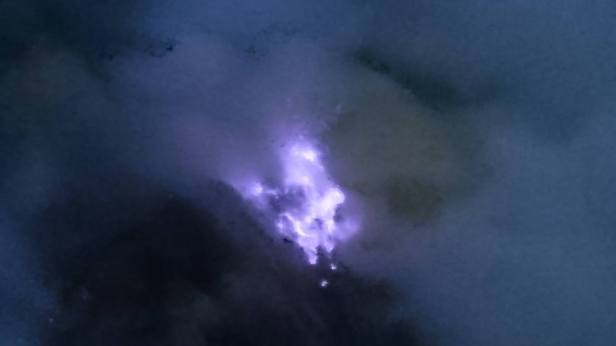 Been to Java or planning a trip? I’d love to hear from you. Feel free to comment 🙂